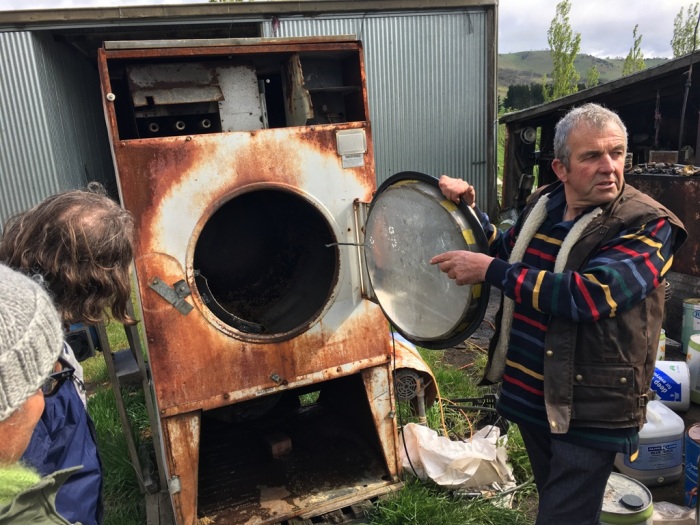 They do things a little differently at Belgrove Distillery. Which is probably why some of the drinks that come out it are like nothing you’ve ever tasted.

At the beginning of our visit, we gathered round a rusty old industrial clothes dryer out in the yard. A gentleman in a colourfully-striped jumper and a sheepskin-lined vest points into the machine’s belly, and tells us he added a sprinkler attachment, where he puts rye and runs it for 24 hours to start it germinating.

That’s the beginning of how Peter Bignell makes farm-to-bottle rye whiskey, and this is his domain in the Tasmanian town of Kempton.

Belgrove is the last proper stop (there were plenty of improper ones to follow) on our self-guided day tour of distilleries within striking distance of Hobart, as part of a weekend loosely associated with my 40th birthday – an association which got progressively looser as the day progressed. A dozen of us piled onto a bus we hired from Experience Tasmania and in the morning we started with gin (and tonic, natch) at Shene Estate. We kicked on for lunch and single malt whisky at Redlands Estate, and then we dropped in at Belgrove.

And this is the one. It’s the distillery you can imagine yourself in, tinkering away, turning whatever crosses your path into liquid gold – or failing that, at least into something your guests will find highly surprising. More on that below.

Most of the distilling operation takes place inside an old converted stable, and the old timber door acts like a portal into another dimension.

Peter built his own still with sheets of copper, and there is a pump for biodiesel which he made from a Sunbeam Mixmaster. Several of the other stalls include random barrels of spirits at various points in the ageing process, and each barrel was hand-charred by Peter onsite. The mixing and tasting areas are located in other stalls.

It’s all pretty cool stuff. I could almost see my friend Dave – who by day is a mild-mannered scientist working with bionic eyes and brain electrodes – thinking about how he might be able to knock up something similar in his backyard.

It’s fair to say that reactions to the wide variety of different liquors on offer varied sharply depending on our various individual tastes. But that’s the beauty of having such a broad range, many of which were simply unlike anything else doing the rounds. I particularly liked the two barrel-aged ryes, and don’t just take my word for it: Jim Murray, who writes the world’s leading guide to whiskies, rated the aged rye 94.5 out of 100. This officially puts it into the range of Liquid Gold – “superstar whiskies that give us all a reason to live”.

Peter’s un-aged rye is a bit like a smoky moonshine. My friend Scott Fraser warned me that after he drank some he spent an hour wandering around in a daze, repeating over and over to his partner: “That tasted like a knife fight in Tijuana”. We all had some and no knife fights ensued – but I can confirm it was a bit WA-HEY! and more than a little WO-HO!.

You can imagine that if you left a huge apple pie to cool on the sill then went for a walk in the fields, Peter would have turned it into some kind of high-octane liquor by the time you returned – and then insisted you stop to enjoy a good long draught of it. Coming soon at the time we visited was a crouton vodka, the idea for which came from a huge haul of leftover bread.

Apart from the ryes, my favourites were probably the Ginger Hammer and the Coffee and Rye Liqueur, which was designed especially to make espresso martinis – but I can testify that it also goes down pretty well as a sweet sipping drink at the end of the night. And my espresso martinis got rave reviews after I got back to Melbourne with a bottle of the stuff.

Outside the stables is a gorgeous farm of rolling green fields, and it’s all part of the paddock-to-bottle process: Peter grows the grain, germinates and malts it, uses the waste to produce bioenergy and distils the spirit before putting it into a barrel on site for the ageing process. And he feeds the used mash to his sheep, who by all accounts seem to enjoy it.

While it is small enough in scale that we can all imagine ourselves here, the head – and only – distiller at Belgrove is absolutely the mad genius of the operation, and he is like an alchemist forever in search of his master work. Also, did I mention that he is an internationally-renowned sand sculptor and ice sculptor as well as being a farmer and distiller?

You can try and buy Belgrove’s products in plenty of locations around Hobart, but to really get the full experience you need to drop in and talk to the man behind the operation. Highly recommended.