This is possibly Glenrowan’s best known attraction and it would be wrong of me to write up the totem pole section of the town without shining a light on one man’s multi-million dollar love letter to the legend of the Kelly Gang.

That man is Bob Hempel. On the day we visited he claimed to be a descendant of the Kelly family. It struck me as dubious, but to be honest it doesn’t matter. What matters is that he built the Ned Kelly Computerised Theatre, which is truly magnificent in its awfulness. It is beautiful. It is ridiculous. It is strange and it is wonderful in its strangeness. Most of all, it is a monument to what someone can achieve when they permanently put reality to one side and turn their eccentricity into a business opportunity. Don’t believe the TripAdvisor rating – this is a unique Australian attraction and if you approach it in the right spirit you won’t be disappointed.

I’m not the first expeditionary to machete their way to this animatronic jungle. Travel writer Bill Bryson might as well have been writing a guest entry for this website when he penned these lines for his book In a Sunburned Country: “I can honestly say that I have never seen anything so wonderfully, so delightfully, so monumentally bad as Ned Kelly’s Last Stand. It was so bad it was worth every penny we paid. Actually, it was so bad it was worth more than we paid.”

The first two scenes are classic animatronics, with people rocking back and forth, moving one arm and so on. But an early highlight is owner Bob Hempel as the narrator, who seems to be channeling the Gatekeeper from the Atmosfear series of video board games that were all the rage in the 1990s. It’s Halloween fright night meets colonial Australia meets amateur theatre production. And it is awesome.

I was also a fan of the wildly different sizes of some of the figures in the shoot-out scene. One police trooper was so big he makes the rest look like dwarves. And I have to say that if I was a-trooping along trying to apprehend a dangerous gang, I’d be taking Big Dave with me as well – especially if you were up against Ned, who like Big Dave is not only larger than life but twice the size of everyone else in the area. No wonder he was the leader. 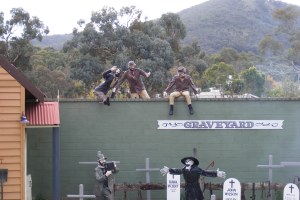 I’m speculating, but this could be one of the reasons  you get a lot of time to check out the first two scenes, but they really whip you through the outdoor gunfight part before you can work out what’s going on. And I can’t even begin to guess what’s going on in the graveyard section, which doesn’t seem to play any part in the show whatsoever. Before you know it, you have exited through Bob Hempel’s house back into the main street of Glenrowan. But there are more delights awaiting you than I can do justice to in one short entry.

Before I ramble on longer than one of grandpa’s stories about the Great Depression, just go. You won’t [ok, it’s possible you might] regret it.